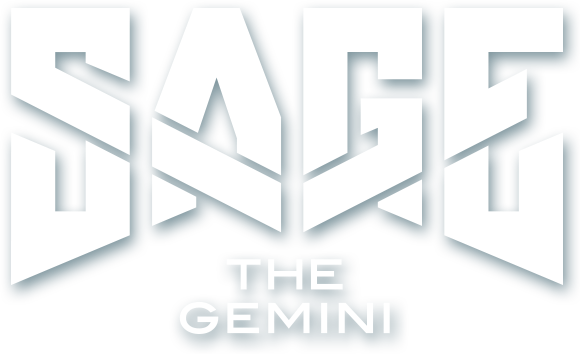 At 6-feet 5-inches tall, Sage The Gemini quietly makes his presence known when he walks into a room with a confident smile. That same presence defines his music. The 23-year-old Bay Area native stands out by not only writing, rapping, and singing, but also personally producing, recording, and even mixing the majority of his material.

“It’s like I’m a one-man band,” he grins. “I never wanted to be the guy who’s like, ‘I don’t have music out, because I don’t have anyone to record me or give me a beat.’ I’ve invested everything I can into this vision, so I can always create songs my way.”

His signature touch has yielded an impressive string of smashes since he first emerged in 2013. Without a cosign of any kind or traditional promotion, Sage’s self-produced breakout single “Gas Pedal” [feat. Iamsu!] went double-platinum and became his first Top 40 entry; receiving the remix treatment from none other than Justin Bieber. He followed up with “Red Nose,” also self-produced, which went from a regional sensation into a national hit, earning a RIAA platinum certification.

His debut album, Remember Me, earned critical acclaim and bowed in the Top 50 of Billboard’s Top 200. Next, he joined forces with Nick Jonas in 2015 for the hit “Good Thing,” which lit up Billboard’s “Hot 100” chart and notched over 17 million YouTube/VEVO views. Realizing a lifelong dream, he teamed up with Flo Rida for the platinum “G.D.F.R.”—which went Top 10 in ten countries and racked up 250 million YouTube/VEVO views. Along the way, he would tour with the likes of Wiz Khalifa, Jeezy, Rich Homie Quan, and Ty Dolla $ign, contribute two anthems to the #1 Furious 7 Official Soundtrack Album, and garner praise from Complex, Noisey, The Fader, XXL, and more. Fresh Empire focused on him for the documentary “Sage The Gemini’s The Come Up,” exploring his alcohol and tobacco-free lifestyle.

Initiating a partnership for all of his solo music between his own Global Gemini label and Atlantic Records in fall 2016, Sage remains poised to make his biggest impact yet.

“I don’t feel like this is kicking off a new chapter,” he admits. “I feel like I’m finally kicking off the very first chapter. It’s like these past years we were just planning on writing the book. We were weeding out the bad and accepting the good. This is the beginning right here.”

His 2016 single “Now or Later” and the first release coming from his new partnership with Atlantic Records, sees Sage gleefully name check Lucious and Cookie from Empire and John Cena before shifting into the slick and sugary refrain rife with clever candy references.

“I just have a big imagination, period,” he goes on. “My songs are based on that. In my music, I’ll see color. It reminds me of candy, cars, or a girl. It just flowed on this one.”

As Sage puts it, he’s “bringing imagination back.” Pop culture could certainly use a healthy dose of fun, and he’s serious about that. “I’m like a big goofy kid. I love cartoons. Amazing World of Gumball, Family Guy, American Dad, and The Cleveland Show are some of my favorites. Nowadays, shit’s too somber. I like to keep it positive.”

That’s precisely why Sage’s music is going to resonate for a very long time to come with listeners everywhere.

Sage quite literally drives every element of his music. A multitalented artist, he’s an accomplished producer whose vision has fueled most of his biggest successes from inception to chart domination. “I love the challenge of making catchy urban music and doing bigger stuff, because I want to be the biggest artist on the planet,” he adds.